We've been a bit lapse with the upkeep of this blog over the past year and it was a very challenging year following the devastating fire that destroyed the Karsten factory and store, but as you would expect, like a phoenix they have risen from the ashes stronger and more formidable than ever!

I will backtrack and fill in some post from our camping adventures throughout 2018 but thought we'd do a very quick catch up with what's been happening so far in 2019. 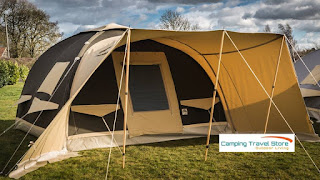 Well, we're two shows into the season already with the first one being a very cold (not to mention windy) one in early February. This was the display where we were able to show off the Combi-Awning connector for the first time! We had been in discussions with Karsten about making one since November the previous year, and now it was on display. So to say that it turns heads is an understatement. Connecting directly to the tent we thought it looked the business and no poles involved in the 15-minute setup! 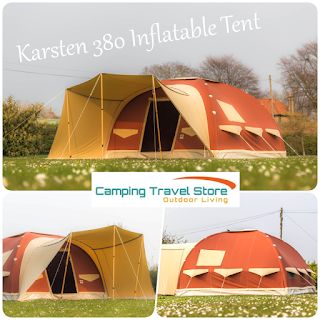 For our display in April, we unleashed the Karsten 380 Air Tent for the first time in the UK, together with the new Veranda Awning which we fitted to the Karsten 280. The Karsten 380 is indeed a beast. With larger tubes and sleeping 6 comfortably across the back in 3 separate compartments, this tent has so much space for the larger family. It shares the same awnings as the 350 so for this show we added the Combi Awning and Connector.
The Veranda Awning also caused a stir, with it's longer comfort awning and colour coded accents and window covers as standard. We'll go into these new additions in more detail on additional posts.